The Mission of Gulab Devi Chest Hospital is

Lala Lajpat Rai was a well known figure in the political and social circles of pre­-Independence India. His mother, Gulab Devi, died of TB in Lahore. In order to perpetuate her memory, Lala Lajpat Rai established a Trust in 1927 to build and run a TB Hospital for women reportedly at the spot where she had breathed her last.

The Trust purchased 40 acres of land in April 1930 from then Government which gave a free grant of an additional 10 acres on Ferozpur Road (now Sharah-e- Roomi).Construction work was started in 1931 and completed in 1934 when the Hospital gates were opened to TB patients. 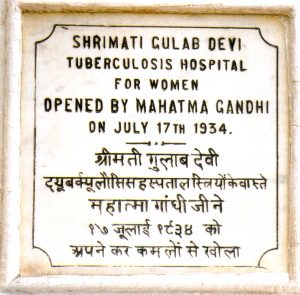 A marble plaque bears witness to the opening of the Hospital on 17th July 1934 by Mr. Mahatma Gandhi. On the migration of trustees to India in 1947, the Government invited Begum Raana Liaquat Ali Khan, Syed Maratab Ali, Professor Dr.Amiruddin and some other notables and philanthropists to become acting Trustees of the Hospital in July 1948.They constituted a Managing Committee with Begum Raana in the Chair, for running the Gulab Devi Chest Hospital.

In pursuance of Rule 2(iii) of the Rules and Regulations of the Hospital the Chairman , Syed Wajid Ali, had nominated Syed Shahid Ali as the Chairman (designate) to take over the office as Chairman in the event of his demise. This was reaffirmed by the Members of the Managing Committee unanimously in a meeting held on April 20,2002., Syed Shahid Ali worked as Chairman of Managing Committee from April 2002 to June 2013.

At the time of Independence, the Hospital had 50 beds. The medical facilities kept on improving steadily and at present the Hospital has transformed into the biggest Chest Hospital in South East Asia with 1500 beds giving tertiary health care to patients with all sorts of cardiac and pulmonary diseases, especially tuberculosis . The Cardiac Wing started functioning in 1984. The idea behind this innovation was that most of chest patients presented with Cardiac co-morbidities and were not treated elsewhere. This is a complete Unit and is equipped with most recent equipment performing all the cardiac diagnostic and therapeutic procedures in routine. Thoracic and Cardiac Surgery is being done six days a week in 3 different operation theaters and experienced team of doctors supervise all the departments. In addition to the latest X-Ray Machines, the Radiology Department also possesses a Spiral CT Scan and almost all the procedures are carried out free of charge.

On academic side, the Hospital is affiliated with Fatima Jinnah Medical College for undergraduate studies and its training is recognized by The College of Physicians and Surgeons of Pakistan for Membership in Chest Diseases and Fellowship in Cardiology. Now the Hospital has its own Post Graduate Medical Institute for teaching programs in different concerned specialties, and this PGMI is affiliated with University of Health Sciences, Lahore and University of Sargodha, Sargodha.

For more than half a century many philanthropists, the Managing Committee, doctors, nurses and staff of this Hospital have struggled hand in hand with missionary spirit to help non-affording and destitute patients. These needy patients undergo sophisticated investigations and receive costly treatment, including operations, totally free of cost.

"Health is the most important thing you have in life!"

Contact us now to schedule an appointment or For Donations.